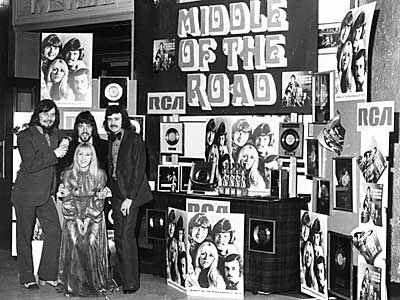 After 3 highly successful years with RCA and Catoca the band were approached by a German record label, Ariola Eurodisc. They were a well established European label catering for the German speaking market.

They, like RCA Italiana in 1970, were keen to capitalise on the lucrative English language music scene. 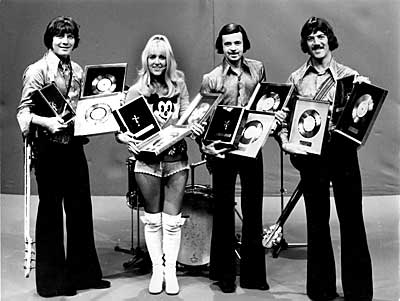 Ariola made an offer to Middle of the Road that the band just couldn’t refuse. Their short term contract with RCA was coming to an end and it seemed like a good opportunity for them to develop their style and try to shake off the flippant pop image of their singles. They wanted to go their own musical way. 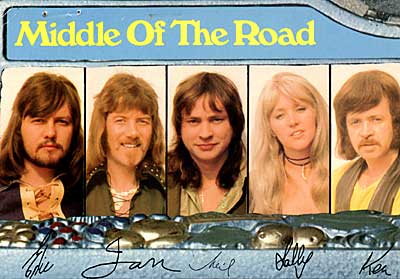 The transfer from label to label, however, was far from smooth. It set off a marketing war between Ariola and the giant RCA Corporation with the band well and truly in the middle. RCA had a stock pile of relatively commercial songs from the “old team” still available for release as singles. 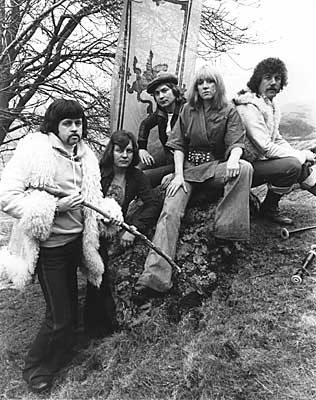 Ariola were starting from scratch placing all their faith in a renewed collaboration between Middle of the Road and the successful Spanish songwriter/producer Fernando Arbex, the writer of “Soley Soley”.

The release of their first Ariola Album, “Music Music”, was timed for the 1973 Berlin Radio Fair in the late summer. The single chosen for release was “Samba D’amor”, a Latin style song from Fernando Arbex. It struggled against the strength of the RCA releases but with TV appearances and radio interviews galore it became a minor hit in Europe. 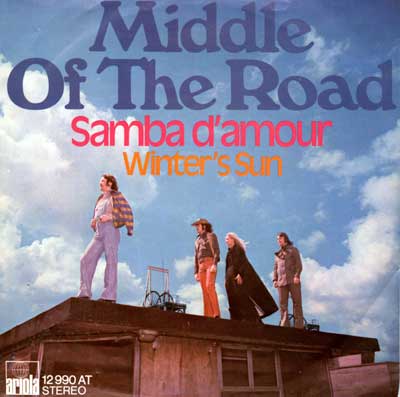 Ariola did not have the rights to release material in the UK and so an arrangement was made with a local Scottish record company to distribute “Music Music”.

The album, originally recorded in the Madrid Studios of RCA in Spain, seemed a little lacking in drive and so arrangements were made for the band to go in to Manfred Man’s Workhouse Studios in Old Kent Road and “10cc’s” Strawberry Studios in Manchester to spice them up a bit with additional percussion, strings and remixes.

In spite of these improvements it failed to attract national attention in the UK and was relegated to obscurity there. The European version went on to be quite successful. 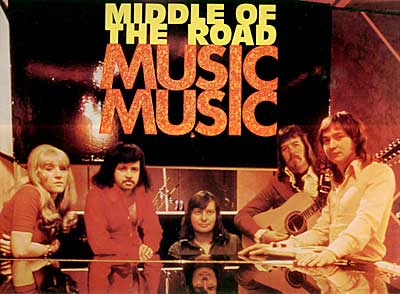 After the failure of “Music Music”, a single which was already doing quite well in Europe, was launched on the DJM Label in the UK. Dick James Music was a well respected label based in London and distributed by Pye.

They initially signed Middle of the Road for a single release. “Hitchin’ a Ride in the Moonlight” written by the band’s lead guitarist, Neil Henderson, and long time writing partner, Ricky Peebles, was a vigorous recording which brought back the groups more recognisable sound. 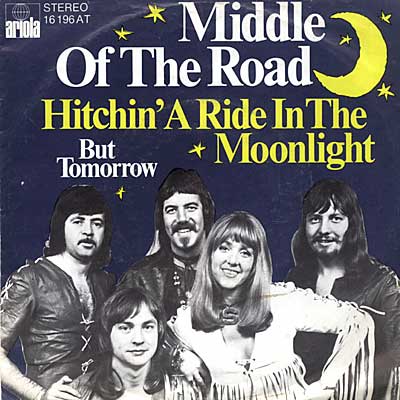 Not only was it a song more suited to Sally’s voice but the old group harmonies were once again in evidence. However, it looked as though either the group and/or the record company were no longer in favour with the UK music scene and the single flopped. Once again Europe demonstrated its loyalty to the group and the single was a minor hit there. 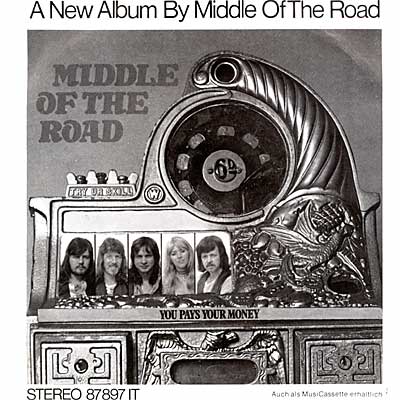 It was obvious that the band was searching for a style now that it had been given the opportunity to go its own way.

Unfortunately, the music business would not wait for something to develop and the next few albums were a bit of a mix of pop and somewhat old time Rock and Roll.

But they were edging towards a brand of music which was not what the business wanted, nor was it what they could afford to continue to record. With their new found freedom came the realisation that the days of languishing in a recording studio with time to create new ideas was expensive and more and more their sound was beginning to be swamped by orchestration.

The individual sound of their vocals, in particular Sally’s voice, was being compromised by material that really did not suit them. In short they had lost their way – at least as far as the record company was concerned. With no releases reaching the top ten anywhere, Ariola appeared to lose interest in Middle of the Road. Although the band were contracted to provide the company with only 4 albums during the duration of their contract the record company had the option of requesting an extra one. This was supplied, but it was never released to the band’s knowledge. 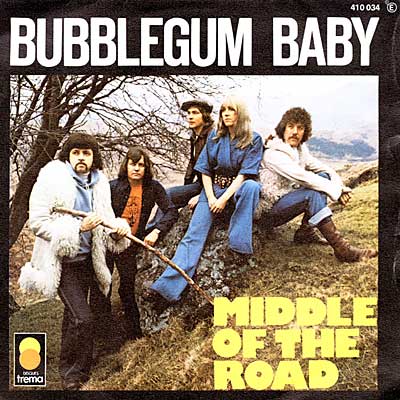 The writing was well and truly on the wall for Middle of the Road and one last effort was made to recapture at least one European market. Their final album, which included the single “Bubblegum Baby” was put together in 1976 for a French record label. “Black Gold” was a last fling in the studio and they decided to go out with a bang – full orchestral backing.

Sadly, the bang became a resounding thud and Middle of the Road’s 6 year tour of success was at an end.

With no real prospects of the band recovering, Sally left to try a solo career but her heart wasn’t in it and with the sad death of her mother the line “Where’s your Mama Gone?” became too painful to contemplate. 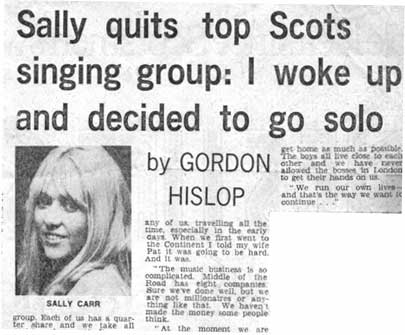 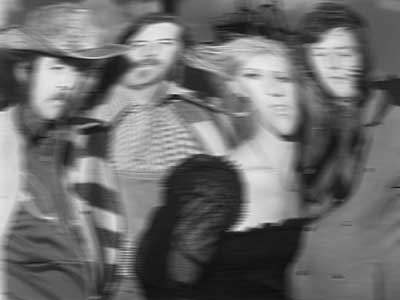 The boys tried to find a suitable replacement but the spark had gone and Middle of the Road was soon to be relegated to be nothing more than a tribute band.

In 1978, Ken left to return to his earlier career in film production and sound recording while Ian and Eric continued to exploit what was left of the Middle of the Road reputation with a new singer, Linda Carroll. 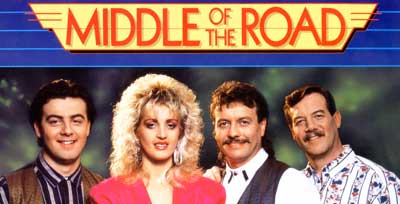 Finally, they settled on a line up consisting of an almost look alike blond, Lorraine Felberg, fronting the band, Ian on guitar, Eric on Bass Guitar and Ian’s son, Stuart, on keyboards and programming. Later Lorraine and Stuart married keeping everything in the family.

For quite a few years this formula worked on the concert circuit in Europe but when major Nostalgia TV shows required the original band, Ken and Sally were called in to make guest appearances relegating any look alike to the dressing room. These TV appearances must have rekindled some interest because during the early eighties when the Stars on 45 phenomenon was popular, all of the originals travelled to Holland to record a disco medley of their hits for CNR. 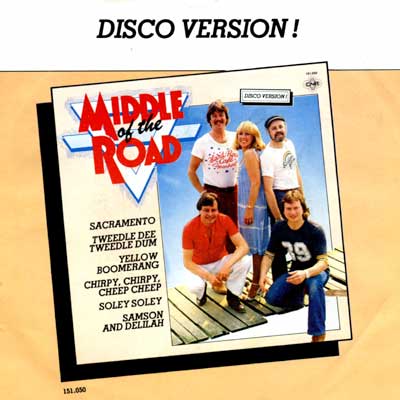 The eighties were to be the last few years of work for Middle of the Road until….